An introduction to the Linux graphics stack

Unless you’ve run into a terrible problem with your GPU, I bet you never spent some time actually thinking about how we depend so heavily on graphics to actually do anything meaningful1 on a computer: from small square blinking letters on a terminal to the utmost insanely complex games we play these days - in the context of Linux, it all depends on the DRI!

This should come as surprise to no one! And as you can probably imagine, the Linux graphics stack is comprised of many layers of abstractions, going from the largely abstracted userspace application that you’re running (a browser!) to the bytecode that is actually interpreted by your graphics card.

These many abstractions are what allow us to have our glorious moments of being a hero (or maybe a villain, whatever you’re up to…) without even noticing what’s happening, and – most importantly – that allow game devs to make such complex games without having to worry about an awful lot of details. They’re really a marvel of engineering (!), but not by accident!

All of those abstraction layers come with a history of their own2, and it’s kinda amazing that we can even have such a smooth experience with all of those, community-powered, beautifully thought out, moving pieces, twisting and turning in a life of their own.

Just have a look at the beast we’ll be getting into! Feeling adventurous today, ain’t you? Well, fear not. It’s definitely not as bad as it seems, and there’s a lot of logic behind (most) things, so let’s go step by step :). 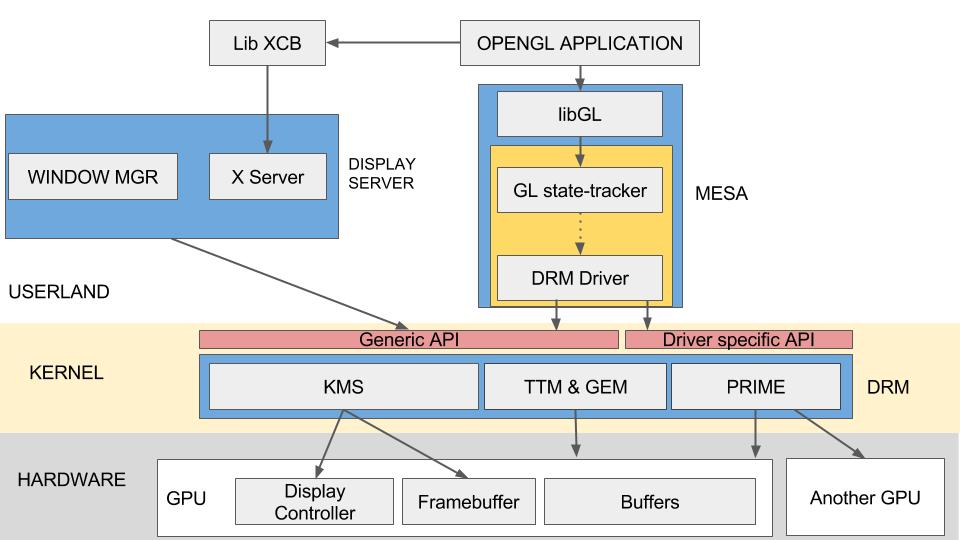 Though in most cases we start from the bottom of the stack and build our way towards the top, here I think it makes more sense for us to build it upside down, as that’s what we’re used to interacting with.

On a funny thought experiment, maybe driver designers do live upside down, who knows…

Even though Linux is generally regarded as a developer/hacker OS, most modern distributions don’t require you to ever leave a graphic environment. Even if you love using the “terminal” on your distro, that’s simply a terminal emulator, which “simulates” using a modern TTY3.

While TTYs are provided by the kernel itself, we need so-called display servers to actually render something more complex to the user’s screen. It acts as an intermediate, dealing with multiple applications wanting to draw things to the screen simultaneously.

As Linux was created during an era where computation was very much migrating from a model of “distributed access” (through time-sharing1), you can still peek into a TTY if you want to:

On most distribution, pressing CTRL+ALT+F1 (or +F2, +F3 and so on) will take you to an old-school text-only display (of course one of these TTYs will also contain the display server session you began with).

Check out a classic teleprinter in action in this video or, if you want to understand the working details on Linux, check out the TTY demystified blog post.

But then, it seems logical that the graphic session we’re used to is one layer above the OS itself, which only provides those TTYs and, quite likely, the Application Binary Interface (i.e. ABI) needed to “talk” to the OS, which is indeed the case (currently) :).

In an X session for example, the X server (or your compositor) will render its windows through this ABI, and not directly through the hardware. Actually, the kernel ABI for hardware access through the Direct Rendering Infrastructure (DRI) is a recent development. Before it, the X server would simply access hardware directly, so all userspace software depended on it, and the slightest lack of coordination between applications could wreak havoc in the graphics card 😵!

The X server has many years of history and lots of “curious” design choices (to put it lightly). If you’re at all interested on understand it better, have a look at the xplain blog!

But enough historic techno-babble! How does our application, then, render its stuff using a window server? The short answer is: it doesn’t!

Actually, anything that wants to render elements that are independent of a window server will have to use a graphics API like OpenGL, and that’s where Mesa comes in!

First, notice that we’re already down a level: the window server shows us cute windows and deals with user input in that interface, wonderful! But then I open Minecraft, and we’re already asking for 3D objects which the window server can’t possibly handle effectively, so Mesa was introduced to provide a second route for applications to send their complex commands directly to the kernel, without the need to go through the display sessions’ (bloated and slow) rendering mechanisms, which are quite often single-handedly optimized to show us application interfaces (the infamous GUIs).

As a side note, the X server is also OpenGL capable, and you can see this through its glx* API commands, or even some commands (ever heard of glxgears? 😏).

On a birds eye view, our (supposed) game will try to run its 3D routines, which are written in shader-speak (for example OpenGL’s, whose language is called GLSL), which Mesa handles for us, compiling and optimizing it for our specific GPU, then sending it to be run by the kernel, just like your window server does, but for anything!

An important point to notice here is that, of course, the window server is still needed for user interaction in our game. It will query and send user commands to the application, and will also handle windowing and displaying stuff (including our game, as its window is still managed by the window server), as well as dealing with many other system-related interactions that would be a nightmare for game devs to implement.

Another important point is that writing user applications which don’t require using shaders would be a total nightmare without a display manager, as it provides many useful abstractions for that use case (which already covers >90% of the uses cases for most people).

We’re getting close! Next stop is: the Linux kernel!

The DRM and KMS subsystems⌗

The Linux kernel is, of course, comprised of many moving parts, including inside the Direct Rendering Manager (DRM) itself, which I cannot possibly explain in this one blog post (sorry about that!).

The DRM is addressed using ioctls (short for I/O Control), which are syscalls (short for System Call) used for device specific control, as providing generalist syscalls would be nearly impossible – it’s more feasible to create one ioctl(device, function, parameters) then treat this in a driver than to create 2000 mygpu_do_something_syscall(parameters) for “obvious” reasons.

For the inexperienced reader, it’s interesting to notice here that the approach of one syscall per driver-specific command would bloat the general kernel ABI with too many generally useless functions, as the large majority of them would be used for one and only one driver.

Just for reference, in my kernel I have 465 syscalls as defined in the system manual. Putting this vs a simple estimate of drivers in the kernel * commands only they use should give you some perspective on the issue.

Those ioctls are then wrapped inside a libdrm library that provides a more comprehensible interface for the poor Mesa developers, which would otherwise need to keep checking every ioctl they want to use for the unusual macro names provided by the kernel’s userspace API.

One very shady aspect of graphics rendering that the DRM deals with is GPU memory management, and it does this through two interfaces, namely:

The older of those two is TTM, which was a generalist approach for memory management, and it provides literally everything anyone could ever hope for. That being said, TTM is regarded as too difficult to use45 as it provides a gigantic API, and very convoluted must-have features that end up being unyielding. For instance, TTM’s fencing mechanism – which is responsible for coordinating memory access between the GPU and CPU, just like semaphores if you’re used to them at all – has a very odd interface. We could also talk about TTM’s general inefficiencies which have been noted time and time again, as well as its “wicked ways” of doing things, which abuse the DMA (short for Direct Memory Access) API for one (check out König’s talk for more6).

Just like evolution, an alternative to TTM had to come along, and that was our friend GEM – which was conceived by Intel, as a simplified interface for memory management. It’s much easier to use by comparison, but also much more simplified and thus, only fully attends Intel’s specific use case – that is, integrated video cards7 –, as it’s limited to addressing memory shared by both GPU and CPU (no discrete video card support at all, really). It also won’t handle any fencing, and simply “wait” for the GPU to finish its thing before moving on, which is a no-no for those beefy discrete GPUs.

Then, as anyone sane would much rather be dealing with GEM, . Jokes aside, what actually happened is that DRM drivers will usually implement the needed memory management (including fencing) functionality in TTM, but provide GEM-like APIs for those things, so that everyone ends up happy (except for the people implementing these interfaces, as they’re probably quite depressed).

These memory related aspects are a rabbit hole of their own, and if you’d like to have a deeper look into this, I recommend these resources:

It’s important to notice, though, that kernel devs are working hard into making TTM nicer all around, as it’s used by too many drivers to simply, paraphrasing König, “be set on fire” and start a memory interface anew. If you want some perspective, take a look at Christian König’s amazing talk1, where he talks about TTM from the viewpoint of a maintainer.

Notice, however, that the DRM is only responsible for graphics rendering and display mode-setting (that is, basically, setting resolution and refresh rate) is done in a separate (but related) subsystem, called KMS (short for Kernel Mode Setting).

The KMS logically separates various aspects of image transmission, such as

And you can actually find where this information is available by consulting the /sys/class/drm folder. There you can see subdirectories referring to specific graphics cards (i.e. card*) and also their render nodes, which indicate their capabilities of executing general programming applications, like the ones in machine learning, which don’t depend on having a graphical output. Inside these subdirectories, then, you can see some files indicating things like connection status or mode list.

For a quick overview, check out this image:

I can already hear you say

OMG Isinya, that was a hell of a lot of information 😵.

But hey, you just read it through (what a nerd)! On a following post I’ll talk about testing the kernel pieces of this puzzle, hope to see you then :).

A small disclaimer: of course there are many disabled people which need other methods of interaction with a computer that don’t rely as heavily on graphics, and I do think it’s a huge problem that we don’t have alternatives for those people in a large majority of cases, as most software does not give the lightest thought to the vision impaired. I should talk more about this in the future but, for now, please don’t forget it’s an existing issue that needs addressing!

Which I might even talk about in another post – excuse me, but that requires a little too much research for the time I have currently.

A classical TTY (or teleprinter for the acquainted) used to be an endpoint for interaction with a central computer that held all the resources for users (we call that a time-sharing computer), and was actually not much used outside of that context. A terminal emulator would be called a pseudo TTY (PTY).

The attentive reader might have thought about Intel’s discrete video cards at this point, and as a matter of fact Intel is actually working with TTM to support those products. See: phoronix.com - Linux 5.14 enabling Intel graphics TTM usage for their dGPUs